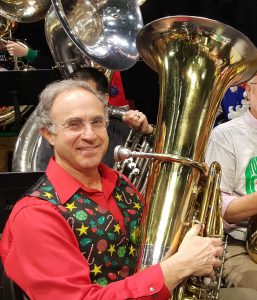 “It was love at first note.”

I started playing tuba when I was in fifth grade and played through high school. I loved it so much I even thought about becoming a music major in college, but my main interest was always in science and math, which, along with working to get through college, didn’t leave me any time for playing music.

My first instrument was the trumpet, but the one I had as a hand-me-down was in desperate need of repairs and nobody in my life was going to repair it. So, one of my music teachers suggested that I try the tuba because my elementary school owned one that I could use for free. I tried it and it was love at first note. I also liked it because I’m also sort of a ham. If you’re a trumpet player in a band you’re usually competing with a lot of other trumpet players, but there’s usually only one or two tubas, so you can always shine as a tuba player.

After high school and college there were other priorities like work and raising a family so for the next 40 years I only occasionally played tuba again. But I knew that when I retired, I wanted to get my own tuba and play it with a band.

I first learned about the New Horizons Band from the times I heard them play at my church, the Unitarian Universalist congregation at the Glaser Center, and from Sid Gordon, one of the conductors who was also a friend and church member. I wanted to play with them. So, when I retired in December 2015 I joined the Band.

I appreciate our conductors; they are wonderful. The music is at times easy and at times challenging; a nice mix. I also like getting out of the house two mornings a week to practice with a stimulating group of seniors. The social time, and cookies, are nice too.

If a little is good, more must be better; so I also play with the New Horizon’s Brass Quintet, the SRJC Band, sometimes with the orchestra; with the Rohnert Park Community Band, Sebastopol Community Band, and occasionally with the St. Helena Band and the Hub Bub Club. (I think my wife wants me to dial it back a bit.)

Growing up, I loved jazz music, especially on the trumpet. In high school I got to see some great instrumental musicians up close as a stage crew member at a musical venue in New York. The most memorable of which was Buddy Rich and his Orchestra. That really opened my eyes to incredible instrumental abilities, and also to what a foul mouth Buddy Rich had! I never heard a band leader swear so much in a practice session.

I grew up about 90 miles north of New York City. My most memorable musical experience was, in my junior year, when our high school concert band won first place at a New York State Music Educators Association competition.

I received my B.S. from Cornell University and M.S. in engineering from Stanford University. After a 20-year career as an environmental engineer I attended law school and spent the next 20+ years doing public advocacy law, especially around environmental justice issues. Most of that as a Deputy City Attorney for San Francisco and later as the Director of the California Public Advocates Office under two Governors. I still do some legal work for the Public Advocates Office.

My wife Lúcia is a clinical psychologist and worked at a Children’s Hospital in Oakland for many years, and still runs a private practice. We have 3 daughters, all in their 30’s now and 2 grandchildren. Our oldest daughter, Nina is developmentally disabled and lives in a group home in Santa Rosa. Listening to music is Nina’s most enjoyable pastime. She’s been to all our concerts and loves to applaud our efforts (bravo!).

I enjoy woodworking and house construction and I’m very involved in church activities as a member of the Board of Trustees, and volunteering on various committees. I also like long distance running, something I’ve done for the last forty years although I’ve been sidelined with injuries lately. I also like to scuba diving.

For the rest of my life I want playing music to be a major part. I’m not that old yet but I already see other people my age that are seemingly lost without stimulating interests. I think that playing music is a wonderful foundational activity in retirement. It keeps the mind going, gives me purpose, and keeps me mentally challenged. It also gives me connections with people that I didn’t know before who have a common goal, to enjoy making beautiful music. I can’t wait to get back to it after the pandemic shutdown.