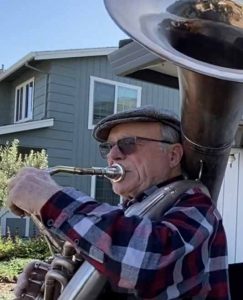 We moved to Athens which was about ten miles away, when I was two or three. It was about six thousand people at the time though it has grown since. My dad was a farmer originally, but when we moved to town he had a job as a farm machinery mechanic. During WWII he was 4F. He started selling insurance in 1942 and that became his career after that, selling insurance and real estate.
I was the oldest of six children. We’re very fortunate. All of us are still alive. There are four that live in Alabama, one lives in Georgia and I’m here in California.

The economy in Limestone County was entirely agriculture. I milked two cows twice a day by hand from the time I was eight. Milking machines have been around since I can remember but you need your electricity and we didn’t have electricity at the beginning. And I’m very familiar with the smell of burning kerosene.

By the time I was ten I could manage a team of mules, put the harness on, hook them to a wagon or a plow, and drive them. I had to walk behind the plow. I was twelve when I first drove a tractor. I was real excited but I didn’t realize what a rough ride a tractor was. My body would ache after riding all day.

It wasn’t easy but I never went hungry and I was never cold, I mean from lack of clothing. Believe me, mornings there can be cold but I never suffered from hypothermia. Most of the time when it snows it’s gone in a couple of days. Six or eight inches once every four or five years. It’s gone in two or three days. A dusting of snow up to one or two inches is gone the next day.

Summers were hot. I was used to that. Nothing felt better than after a day of chopping cotton as we called it, take a hoe to cut the weeds out, than to jump in Dement Creek. That water was cold! (laughs) You’d come out with blue fingernails and lips. (laughs) It still felt good. It was one of those things that after all the chores and breakfast were done on Sunday morning before church I’d take a bar of soap, a towel, and a change of underwear and walk to the creek which was about a couple hundred yards away and take a bath in the creek.

When I was twelve, Norris Christopher a playmate who lived across the street from me, was going to band practice one day during the summer time and he invited me to go with him. Jimmy Cowart, the band director, says, “You look like a tuba player.” And that’s where it all started. I was lucky enough to sit next to a really fine tuba player named D. O. Looney. I never did know what the initials D. O. represented. He went on to play double bass with the Claude Thornhill Orchestra for many years. (editor: Claude Thornhill was an American pianist, arranger, composer, and bandleader. He and clarinetist Artie Shaw started their careers at the Golden Pheasant in Cleveland, Ohio, with the Austin Wylie Orchestra. Thornhill and Shaw went to New York together in 1931. In 1939 he founded the Claude Thornhill Orchestra. The band was popular with both musicians and the public. Miles Davis’s Birth of the Cool nonet was modeled in part on Thornhill’s sound and unconventional instrumentation. The band’s most successful records were “Snowfall”, “A Sunday Kind of Love”, and “Love for Love”.)
I started playing tuba in ’46. I played all the way through high school and then I got drafted into the army and played with the base band at Fort Gordon, Georgia for two years. And I had an opportunity to play with the Augusta Symphony. It was a volunteer organization. Not a big deal but it was a thrill for me. The really nice thing about it was that somebody would pick me and the tuba up in a Cadillac at the base and take me out and feed me. We’d go to rehearsal and then they’d bring me back.

I mustered out of the army in September of ’56 and settled down in Atlanta where I got a job with the post office and went to Georgia State University at night. I loved Atlanta. It’s bustling and—gee whiz— now it is huge! I was there when the metro area passed one million and now it’s more than 6 million.

I joined Fireman’s Fund Insurance Company in Atlanta in 1968. In ’76 they moved me to Los Angeles to manage that claims office. I was fine down there but I hated the commute. It was horrible. On a good day it was an hour. On a bad day it could be three hours. One way, now. I was living in Cypress which is just inside Orange County.

My daughter, Beth Ann, was born when we lived in Orange County. She is a professor at Sonoma State where she teaches music. She has a doctorate in learning and instruction from the University of San Francisco. She’s a vocalist but she plays bassoon, violin, oboe, clarinet, trombone. She still plays tuba better than I do. (laughs) She took her practicum very seriously and taught for six years as a band director in a middle school in Sebastopol and then she taught and was the band director two years at El Molino High School. She now teaches in the Music Department at Sonoma State University She’s been there now a long time. I try not to embarrass her but I can’t help but brag on her. She has gotten over being embarrassed by me.

After the army I did not play music again until I retired. And believe me, it was more difficult than I imagined. I thought I’d just pick up a horn and I’d develop an embouchure in thirty days. (laughs heartily) I’m still working on that. In ninety days I was actually playing with the Rohnert Park Community Band. I sucked big time but I was very fortunate to be sitting next to Bob Moon. (editor: Bob had died only days before this interview.) And I was learning from him big time. A tremendous loss. I am so sorry. I’ve known Bob for fifteen years now. And played with him. He was the one who convinced me to join New Horizons which I did in ‘07. My wife passed away in January of ’07. We were married thirty-six years.

In retirement music has taken over my life and it’s the thing that I miss most about the situation we find ourselves in. (editor: We were sheltering in place because of the Corona virus.) I just hope I can get back to playing on a regular basis before I finally pass away. But living here in Sonoma County, I guess I was so lucky to land here. There are so many opportunities to make music. I felt like I was in hog heaven here. I have loved living here. And meeting friends, just marvelous.

Tom Clark introduced me to TRAD JASS. He brought me along. Tom and Bill Badstubner encouraged me to go to TRAD JASS in ’08 and that was an awakening me for me. The two of them and Phil Stires just encouraged me, let me play and let me screw up, gave me pointers. Wonderful people. With Trad Jazz, as you know, you have to learn a different music notation; it’s just not written out tuba. You just get the chord charts and I had to learn how to do that. And I’m still learning. I’m working on my arpeggios now. Especially with the string bass, I have to do that.

I don’t know that I could count how many groups I’ve played with. I started out in Rohnert Park but it must be up to twenty now. It’s wider than just Sonoma County. I venture out. I’ve played as far south as Monterey and over to Sacramento. It’s been one heck of a pleasure. I’ve joined the jazz clubs in Sacramento, in El Sobrante, in Monterey, in Sunnyvale. Besides The New Horizons Band of Sonoma County, I have played with the Corte Madera Community Band and the St. Helena Community Band. And of course I’ve played regular with the Petaluma Community Band, The Healdsburg Community Band and The Sonoma Home Town Band. Playing the 4th of July with them the last eight or nine years has been exciting and a pleasure.

I was playing five, six days a week before the coronavirus. I miss it terribly. I was putting 12,000 miles a year on my car. My selection criteria for an automobile is “How much can I get in there?” I have a full complement of things including a canopy, a sound system. I even have a generator if we get stuck in a place where there’s no plug available. It’s not irregular that I end up taking a sound system somewhere. I can put it all in there. The string bass. Every once in a while I end up sticking a keyboard in. There are instruments all over the house. I’m just sitting here looking at . . . there’s a grand piano. My daughter plays and my wife did. Beth Ann is a fine pianist. And there’s also an 88 key keyboard but I limit myself to the trombone, tuba and the string bass.

With the Flying Eagles Jazz Band and with The New Horizons Swing Band, some of the tunes I play the tuba and some of them I play with the string bass. It’s great fun. And everyone is generous with their talents and with their time and their interest.

In all things, Life is good!!