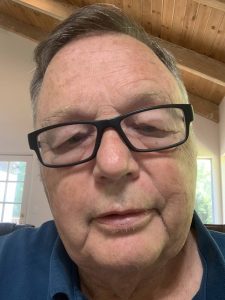 “Band has been a savior for me because it’s a childlike experience.”

I was born in 1947 in the East Bay, in Albany, and grew up in a little town called Pleasant Hill, went to public school there. That’s where I got my start in music playing baritone in the 4th grade. They had a good program. I switched to trombone in junior high and played it in high school and for the first two years in college at UC Davis. Then political activism got in the way and I stopped. I didn’t touch a musical instrument again until I joined the band in 2002 or 2003.

As an undergraduate I did student politics and at Davis we had the whole Farmworker thing and anti-war and I went to Chicago for a summer in ’66. We did open housing marches.

I got my BA at Davis and then I had a little detour. I went to “grad school” in a federal prison. I refused induction and spent the better part of a year in prison at Lompoc. There were a fair number of other draft resisters there. They were the people I mostly hung out with. I think the experience actually made more introverted than the other way around. I don’t talk about it much.

I went to law school in Berkeley in 1973. Then I got a job up here and started working for a small firm. I didn’t even know where Santa Rosa was. After a couple of years I got disgruntled and went off to chiropractic college in ‘78 where I met my wife. We got into TM (editor: Transcendental Meditation) and she took a bunch of courses with the Ayurveda people. We’ve been to India a lot since then, not in 12 years but there was a period of time when we went every year. Mostly in Pune. And she met Deepak Chopra in the early days. She had him to Sacramento to do a seminar with us. She’s written two books on the subject. She knows what she’s doing. (editor: Dr. Helen interned in Pune, India with Dr. Narendra Pendse, served as an Intern in a hospital for lepers, studied with Vaidya Ragu from New Delhi and Dr. Deepak Chopra in Lancaster, Massachusetts. She started her career with Maharishi Ayurved and integrated Ayurveda into her chiropractic practice in 1985. She is the author of multiple books and articles on the subjects of health, beauty and wellness including Ayurveda: The A-Z Guide To Healing Techniques From Ancient India.)

We were first in Sacramento and then after a year in Iowa at the Transcendental Meditation Center. We came back to Santa Rosa in ’90 and raised our family. I practiced as a chiropractor for a while but that was not a perfect fit so I went back to law doing personal injury work. We have two children. My son is an ER doc at Memorial Hospital here in Santa Rosa and my daughter is an industrial designer down in LA. And I have two grandchildren in Petaluma, 6 and 4.

And now I’m in retirement more or less. It’s less than perfect. I’ve had a number of strokes but parts of me have come through fine and music has certainly helped. It’s been a lifesaver. I didn’t cotton to or look forward to being old. I’ve fought it all the way. So band has been a savior for me because it’s a childlike experience. I’m not sure why I started up again. I just had a sense that I wanted it. I returned to my roots and took up the euphonium again. I’m not the player I never was, especially since I’ve switched back from trombone, the problem with the fingerings and the speed. When I started back over with the euphonium I said to myself, “See if you can do quarter notes. Play all the quarter notes. Don’t worry about the others.” It worked out pretty well.

I don’t remember how I got into the band, sometime talking to someone who said, “Oh I know of something you might be interested in” and they sent me Lew’s phone number and I called him up and he said, “Sure, come on down.” That’s when we were at the First Methodist Church on Montgomery Drive. We’ve moved several times since. If I can brag a little, I actually was the one who found the Odd Fellow’s Hall because my wife and I had done some seminars connected to her Ayurvedic practice. I recommended to Bill Hamilton, who was then president, that he check out the Odd Fellow’s Hall. That’s how we got there.

There weren’t many of us back then. I look back at the people who have been in the band and a number of them have passed away. Ray Walker was a sweetheart. (editor: Ray had died only a couple of weeks before.) It’s a unique opportunity for us who are in the band to experience that impermanence of everything. I have a picture from 2003 and I look at that and at the people now and I go, “Wow! We have really aged.” Having the grace to live as we get older . . . It’s interesting to have to come to grips with my own mortality.

There is a sense of community here too. It’s not all buddy-buddy but I’ve made friends and acquaintances all the way through, almost 20 years now. It’s always been a comfort. A lot of stuff was added that helped the camaraderie along like the coffee breaks. And the cookies and pies and cakes.

But also something that made everything much better was the addition of the librarians. I think they are the glue that holds things together. Lew and the other conductors used to have to do all that by themselves. We’d help out a little but there was no organized system. If I had to pare down the band they would be close to the last cut. We’d have the music but not the players. (laughs) Now they are essential. You can say, “I want this part” and they hop right to it. It’s nice.

One of things in the band that is very helpful is that I get to see how other people are doing with their experiences as they grow older. Kind of like the disease of the week. Who’s got surgery this week? It really opens me up to dealing with my own events.

I’m grateful to have the band though realistically I don’t know when we’re going to be able to get back together. (editor: Shelter in place had been in place for 2 ½ months.) I feel like posting a warning saying, “You shouldn’t be leaving home. You should maintain your stay-in-place because a lot of us have complicated medical conditions. We shouldn’t hop back into line dancing.” (laugh) It’s hard to imagine us in close proximity with one another, especially since we play wind instruments.

The only immortal one we have it Lew. He’s amazing. He has the same energy he did when I first showed up in 2002–paying attention to details, remembering people’s names even. He has a personal relationship with all of us. He’s a treasure.

My conclusion at this point is that it all is really an inner dream. You make of things what you attach to them. What we’re going through right now (editor: the coronavirus and the societal upheavals) is inconvenient and uncomfortable but it’s a great opportunity for me to take a look at where my attachments are, how they are attached in my mind. But in retrospect it really did go by fast.