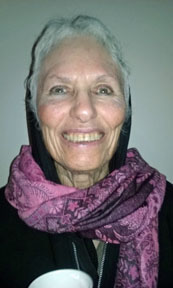 About ten years ago, I read about New Horizons, a band for seniors that welcomed every level of experience: no auditions required.  I thought I would play the drums with them but there were no conga parts.  After checking out a rehearsal and later Band Camp, which was in Healdsburg that year, I went to Stanroys.  First, they gave me a trombone: not for me. Then they gave me a saxophone and I blew it and it actually sounded like a saxophone!  What a thrill!  That was it.  That was my instrument.

I had never played a woodwind before. I had been married to a flutist and could never get a sound out of the flute.  And I barely managed to squeeze sounds out of a trumpet.

I read somewhere that anything you start, you’d be good at in ten years.  So I taught myself how to play after buying a friend’s old sax for $75.  I don’t recall how I heard of Gary Johnson, but I was lucky to get him as a teacher as he came to my house after teaching local students.  He taught me much more than I could have learned on my own.

At a performance of the Kut-Ups in Rohnert Park, I was sitting in the front row, and saw Kaylee, a New Horizons sax player, and Lynn Barthel, clarinet, in the orchestra.  They invited me to join a new beginners group that met before the main New Horizons band.

I went to that for a while until I got up the courage to go to a main band rehearsal.  It was a disaster!  But I picked up the music and tried to practice it.  To my chagrin, the second alto part made no sense.  I credit Gary for helping me master the band music.  He was able to make sense of it for me and encouraged me to hang in there.  Eventually I discovered the joy of making music with the Band.  I love that and the collegiality of our band members.  It is still a thrill to play with everyone and something I never dreamed of doing in my entire life!  I also rehearse with the Swing Band and Ray Walker’s Stompers, a Dixieland improvisation group.  Some of us jam at the monthly Trad Jass event at The Moose Lodge.

I grew up with classical music.  My father loved Bach.  One of my current delights is playing Bach’s Brandenburg concertos on sax.  At City College of New York (CCNY) I was briefly a music major, even though I didn’t play an instrument.  I wanted to compose.  While I was there, the department switched to teaching counterpoint before harmony, and I was writing Gregorian Chant, which was easy due to its strict rules.

Later I took up Conga drumming and played Afro Cuban, Haitian, and African rhythms.  I had the privilege of playing Voodoo ceremonies with my Haitian teacher, and also played for African dance classes.

I performed in an Off Broadway production of Black Medea in which the only music was drums and bells.  The musical director was a Voodoo Priestess.  A ritual was performed on stage using voodoo rhythms to invoke the spell Medea put on a snake bracelet in order to poison her rival.  The show was based on the Medea myth.  All the actors were Black except for the White prince who betrays Medea to marry in his own class, which leads to Medea’s vengeance.

I’ve taken some drum set lessons and loved it, but realistically at this stage of my life I’m not lugging a kit around…..

I’m originally from Brooklyn, Brighton Beach, and then Flatbush.  As an adult I lived on the Lower East Side of Manhattan and then the Upper West Side.

In New York, I was in private practice as a massage therapist, reflexologist, imaginal guide, and medical consultant.

Anthropologist Jean Houston shares her human potential research through activities in her Mystery School.  I went to Mystery school in 1985 because a Shaman friend of mine said I should get to know her.  I was working with catastrophic illness and collected tapes of people who  beat cancer.  I shared them at Mystery School and a woman came to listen who had lost her partner to cancer.  We became good friends.  She invited me to join a  group of her California friends who wanted to start a holistic hospital.  We looked at properties and they worked on me to move out to California.  The hospital didn’t pan out but I was persuaded to move to California.  I moved here in 1989.

Mystery School changed my life.  I was doing body work in New York at the time and Jean described experiences where her body spoke to her through imagery.  I was fascinated and spoke to a doctor colleague about it.  He sent me a client who walked into my office and said her doctor told her that I did imagery work. I had never done it.  She was very angry.  She had a lump in her breast after having it removed years ago and doing everything right.  She was outraged it had come back.  And I said, “Iet’s go in there and have a look.”

She went into her breast and the first thing she said was that her father has shown up with a rusty old breast sword.  I knew she was on to something if she’s talking about a breast sword.  She said he wants to pierce the lump, but she’s afraid that the cancer will leak out and spread throughout her body.  I think to myself, “Now what,” and then I said the only thing I could say:  “Do you trust your father? ” And she said yes, so she let him pierce the lump.  Then she described green liquid pouring out and going through her body into a riparian environment of plants, bushes trees, a stream, and…… mushrooms!  “Uh oh!” I thought and I said, carefully, “What kind of mushrooms?” and at that moment she said, “Oh, they’re benign.”

As it turned out, she self diagnosed: her lump was benign.

I discovered that I have an intuitive gift for this work, which I call imaginal guidance.  I have worked mostly with surgery and illness, but occasionally on other challenges.

I returned to college in the 90’s and got a B.A. in Psychology, majoring in Expressive Arts Therapy.  At the time, there was a merging of economics and psychology in the Psych. Department.  As I was often asked for investment advice by women wanting to invest for retirement, I was inspired to merge finance with ritual and the arts.  I had taught myself how to invest following the sale of my New York apartment.

I created an investment education seminar:  The Joy Of Money(sm) for the financially faint of heart.  Its tagline was Where Wall St. Meets Sesame St.  Each class centered around an altar based on a different Archetype such as The Child, The Warrior, The Magician and The Ruler.  As my students were finance phobic, the lessons were uniquely designed to reach them.  Although they were educated intelligent career women, they felt disenfranchised by the language of Wall St.  They were terrified of facing retirement without adequate savings.

At the end of the six month seminar plus an additional two week Prospectus class, I had a female stockbroker come and talk to them.  By then, they were no longer intimidated by the basic terms and concepts they needed to know.

Before I came to Band, I was very involved in the Healdsburg Literary Guild.  I attended its seminal meeting on a dark and stormy night (no kidding!) at the Healdsburg Library, and became one of its founding members.

I went because I had difficulty walking due to pain in my hip and I thought writing was something I could do from a wheelchair, if it came to that.  I started The Center Literary Cafe, which was attended by writers from all over the county and beyond.

I became a “stand-up poet” when poets at the Cafe wouldn’t get up to read.  I’d ask for a few words and make up a poem on the spot, and that broke the ice.  Some of us started a poetry improvisation group called Road Writers and we had gigs around the county, including Healdsburg City Hall,  Friends House, Noto Cafe in Windsor, Aqus Cafe in Petaluma, Cloverdale Center for the Arts, art galleries and private homes.

I wrote a lot during the ten years of my involvement, which led to my writing a book of BizTales(sm), fictional stories about real businesses, hoping to engage them with the literary community.  It was illustrated by local artists and is still in the Healdsburg Library on its “local produce” shelf, so named because we had a booth at the Farmers Market called that – with our books on display.

On seeking artists and writers for the book from the local schools, I was asked for permission to use the name BizTales at Healdsburg JHS for a book project by the students of an English teacher named Donna Thomas.  The kids wrote fifty -two fictional stories about local businesses, some illustrated. I got them reading gigs at art galleries and the library. They sold out two printings of the books, including at the Healdsburg Chili Cook Off in the Plaza.  They donated the proceeds to the local animal shelter, illustrated on the book’s cover.

The Press Democrat did a two page spread with a photo of the student writers in the Business section.  It was very gratifying to see a teacher acclaimed that way!  She spent a year on that project getting the kids to write and put the book together.

My final year in the literary community, as president of the Healdsburg Arts Council, I put on a county wide Literary Performing Arts Festival called Sonoma Word(sm). It was in reaction to the Sonoma County Community Foundation sponsoring a Performing Arts Festival that excluded the literary arts.  It took place in eleven cities and the theme was Crossing Borders, the same as the Foundation’s sister event. Some of the events crossed cultural borders, others incorporated many different art forms.  It was a year’s effort and very successful.

It could have become an annual event had any of the poets wanted to take it on, or even supported me in continuing it.  However, I found out at the end of the year that I needed a hip replacement.  Once I could walk, I walked away from the literary community.  It had more than served its purpose.  I always say that everything I did in the ten years I was disabled was because of what I couldn’t do.

Currently, I am part of a women’s art co-op gallery/studio called “art Flare”. We have a studio at The Barracks which is a long-standing art colony on the old airfield at Finley St. off Wright Rd.  I do mostly collage and pastels.  We have a few shows a year, including gifts for the holidays.  I’m also writing a book of short stories and attend a women’s drum circle, which culminates in my making up a poem with donated words.